HOW DOES THE PLATFORM WORK:

This is followed by on-demand support for capacity building and implementation of Non-Sewered Sanitation and FSSM solutions at state and city level.

To sustain capacity building efforts in the long run, SCBP aims to generate a pool of trainers on FSSM through Training of Trainers (ToTs), thereby enabling national training institutes to conduct trainings for cadre of government officials on FSSM.

Given that 49% of the urban population in India (Census 2011) relies on on-site sanitation, such as septic tanks and soak pits, Non-Sewered Sanitation options such as Faecal Sludge and Septage Management (FSSM) are critical for achieving the goals for urban sanitation under various national missions.

FSSM is the collection and transportation of faecal sludge from the containment system, treatment of the sludge at a designated site, followed by safe disposal or reuse of the treated sludge.

The Platform provides a sharing and cross learning opportunity for SCBP Partners. To pool in their knowledge resources on all aspects of urban sanitation capacity building. Facilitates joint development of training modules, learning and advocacy material including developing Key Messages and Content. And a platform for sharing and dissemination of FSSM Research, Advocacy and outreach to State governments and Urban Local Bodies. Over the last four years the Platform has produced Training Modules and Learning Content on Decentralised Sanitation solutions, that is now accessed by a larger audience nationally and globally. 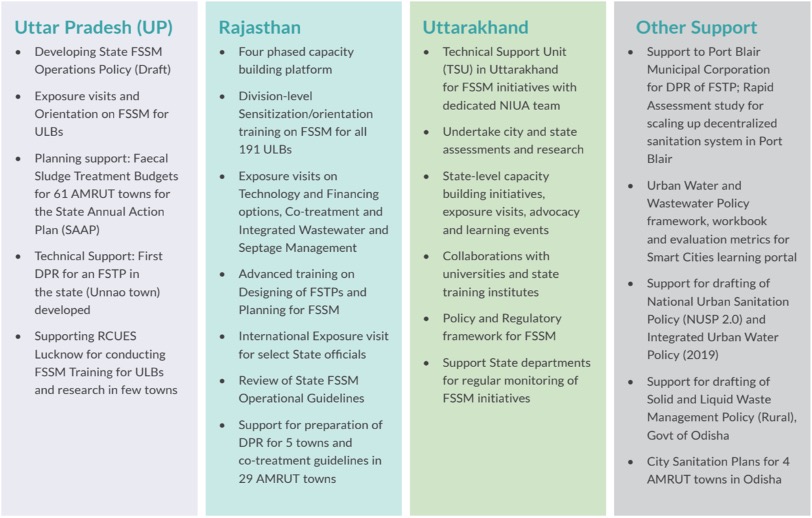